I really wanted to do a post on my beautiful beets…….. 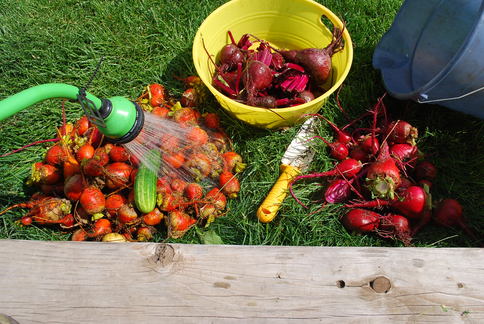 Straight from the garden getting the first cleaning…along with a cucumber that somehow made it into the lot!

But then the next week a vole (or family of voles) ate the entire crop! They also ate all our carrots, potatoes, and garlic! 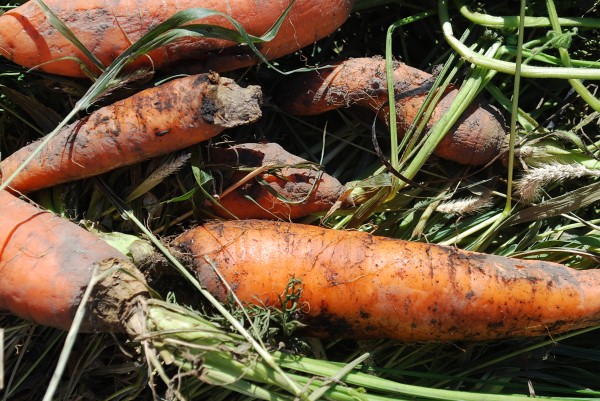 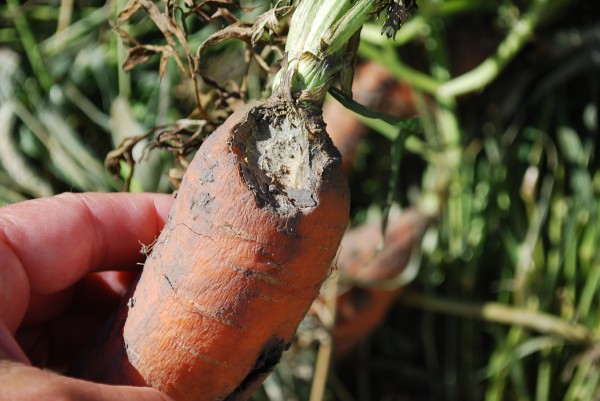 Little varmints! They only chew the tops of most!

Just makes me sick I tell you! …and when I say “crop” I mean we had a LOT….in fact four different varieties, each the width of the whole garden, which would account for maybe about an eighth of the garden itself!  Keep in mind my penchant for exaggeration (which my husband says I am prolific at) so just to prove to you this in NOT one of those exaggeration moments here is a photo of our beets in the garden growing like crazy! 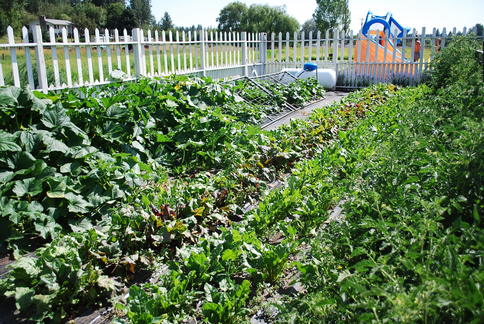 Beets, in the middle.  Far left is squash and far right is tomatoes. At least five rows of beets right there. Also another two rows on the other side of the tomato trellis.

I love beets…almost as much as I love my husband….well….he’s a better kisser…and he pays for stuff so I love him more….but I digress, so back to the beets! This year (because we all love beets… sans my hubby…who hates them… but loves me.) we planted those 4 different varieties!

….And here is a look at what they look like when cut open…. 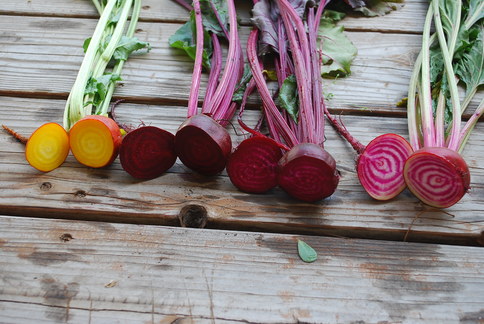 Now here is a “closer” look at the glorious beauty of the beet! 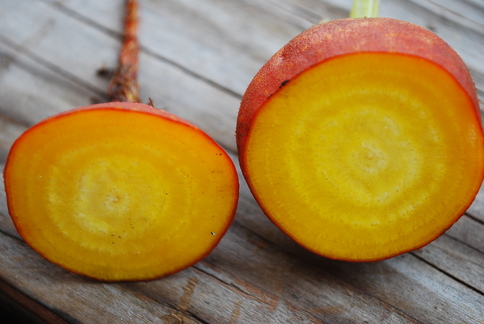 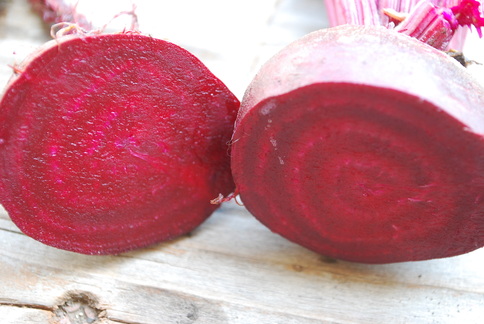 The most common “Detroit Red” I pickle and can these the most. 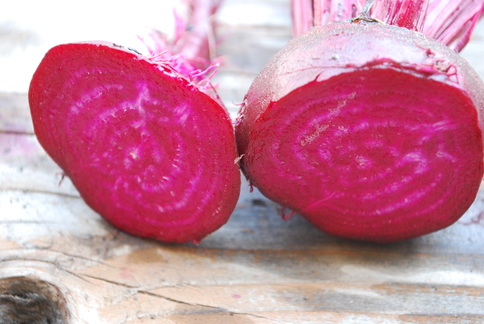 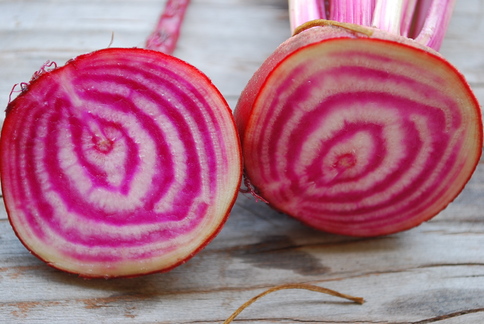 My all time favorite! The “Chioggia Beet”

I fell in LOVE with it….went home and searched for golden beets at every grocery store in town until I found me some golden beets! I had to pay a bazillion dollars per pound but I made that dang salad and was MOST pleased! So the next year we planted golden beets and ate to our hearts content and made salads and so on! Then the following year we got to planning and decided to try a few other varieties after reading my favorite blog “The Art of Doing Things” I got inspired to try the Chioggia ….I had no idea what this beet might be like so you can imagine my delight and surprise to find that it cooked up like a combination of a red beet and a golden ….kinda reminded me of one of those “Big Stick” popsicles I used to get from the ice cream truck when I was little. 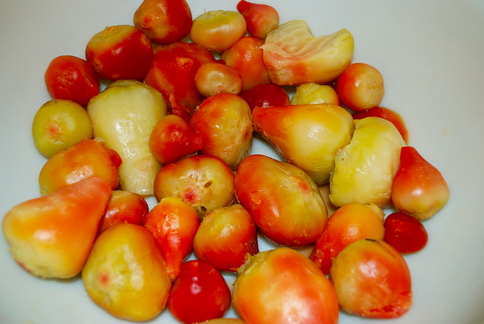 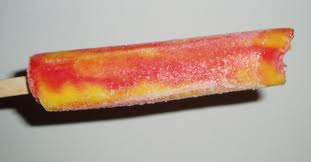 See? Looks just like a “Big Stick” Tastes different though!

So I started making my beet salads using these beets! Yummmmm! Wish I had a picture for you but I don’t! Trust me they are so delish!

Next up is the “Bulls Blood” beet. Also very nice. Similar to the “Detroit Red” but a little sweeter and a bit lighter in color as you can see. 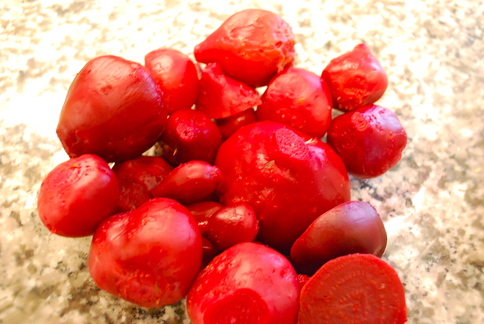 Then we have the typical “Detroit Reds” The most common one that I seem to see sold everywhere. I think the reason could be that it germinates well and seems to be the easiest to grow. However, we have never had any problems growing the other varieties in our garden but we almost never have a problem growing anything in our garden ever….we are very fortunate to have great soil. 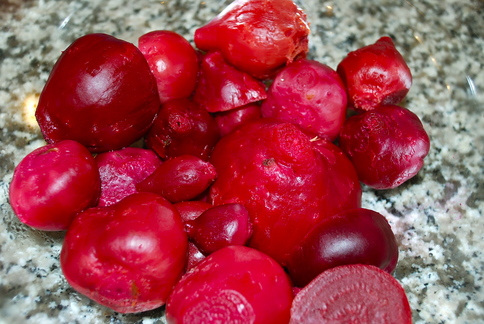 Then there is my beautiful “Golden Yellow Beet”….now I know I said the Chioggia was my favorite, but this golden beet is so yummy that I have to say it really is my favorite favorite! It is so pretty too and presents gorgeously on the plate. We eat with our eyes you know! I use my mouth, but I’ve heard it said…..so….. 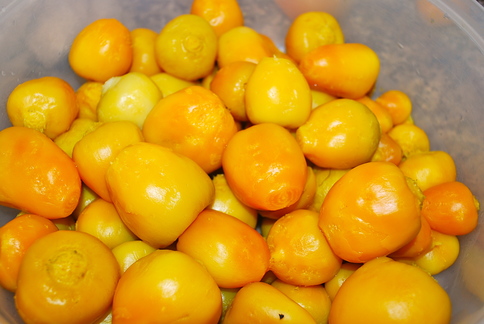 Sometimes I just cook them and mix them all up and eat them for dinner. 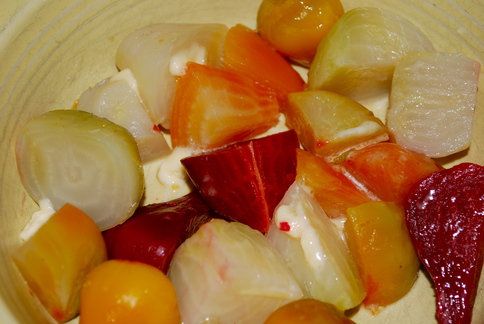 Here is a photo of all of them cooked with a little butter and salt!

What we can’t eat for dinner I can. Usually it’s the Detroit Reds, but I also do some plain Golden ones too so I have some for salads throughout the winter. 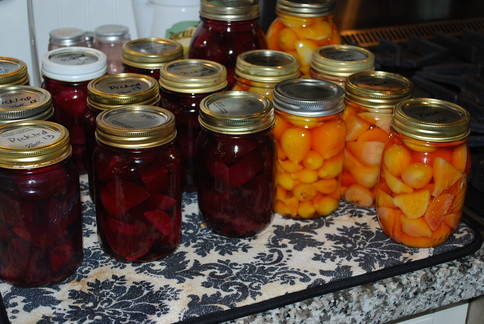 So that’s my beet story!

PS: My story has a happy ending….while sitting in my garden a few weeks ago crying over the death of my beets (contemplating the advice given to me from a local farmer who has NO VOLE problem)…who said “You need an outside cat to take care of your vole problem”….I was thinking to myself….”where the heck am I going to find a cat”? when to my utter surprise I heard a noise behind me in the potato patch and low and behold if it wasn’t a tiny little tabby kitten hissing at me! True story I swear!  Then an angel from above spoke to me and said, “This kitty was sent to you from God and he will take care of your vole problem…cry no more my child”….ok that parts not true, but we have been feeding him/her for the last several weeks now to keep him/her there…. 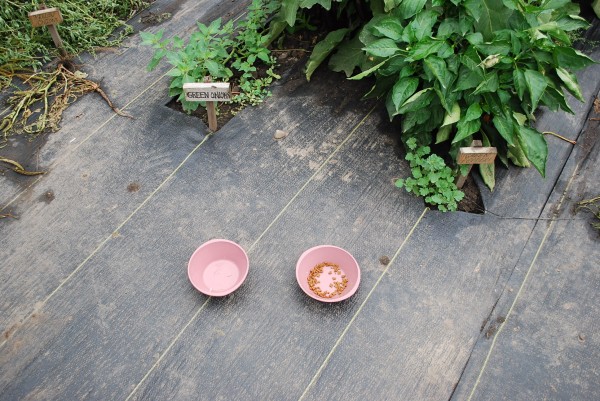 and so far he/she has decided to stay! The hubs even built a tiny cat house that is insulated and has a cute little tin roof with a cupola on top. I bought some bedding straw for the bottom so it can snuggle up and sleep.  We will put it into the garden to try and keep the kitty warm over the winter as we have no barn for kitty to get into. Hence the term “barn cat” ….ours will have to be a “cat house kitty” 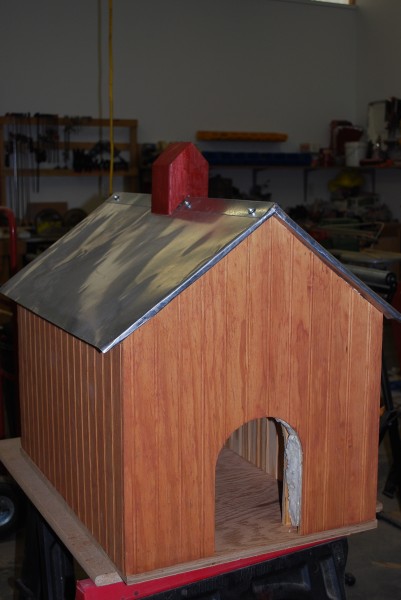 It’s not quite done yet…the hubs wants to put fake windows on the sides and install heating, air conditioning, granite counter tops and a flushing toilet ….

…..Hopefully it will be a good mouser…or voler!